On World Ranger Day, the bison rangers in the Southern Carpathians share details of their mission to help save bison from extinction

Matei and Daniel (whom we like to call Danu) are WWF/Rewilding bison rangers in the Țarcu Mountains, Southern Carpathians, Romania. As rangers, they patrol the area every day with activities linked to the monitoring of bison and the state of their natural habitat, maintenance of the enclosures where bison live from the moment they get here to the time of their release into the wild, the development of the tourist infrastructure and services related to bison observation. In addition, they play an active role in the operations we carry out in annual bison transports and releases in the Țarcu Mountains. They make sure conditions in the field are favourable, including a good access road for the trucks transporting the bison, they help in unloading the bison and then, after the two-month acclimatisation period, they follow the monitoring protocols for wild bison. Apart from this, their earnestness and ambition have opened up extra professional opportunities for them, through which they can accelerate local development in a place blessed with natural wonders now enriched with the presence of the legendary bison, but as with many other rural areas in Romania, stuck in a demographic downward trend and with just a few income sources apart from traditional farming and some jobs in public administration, forestry or commerce, in the nearby towns. Matei and Danu are also working in the local Visitor centre and they are the ones who greet you when you come visit the area for a bison tracking tour. They are also members in the local association, AMZA (Bison Hillock Association Armeniș). On 2017 World Ranger Day, we swiftly interviewed them so that you get to know them better. 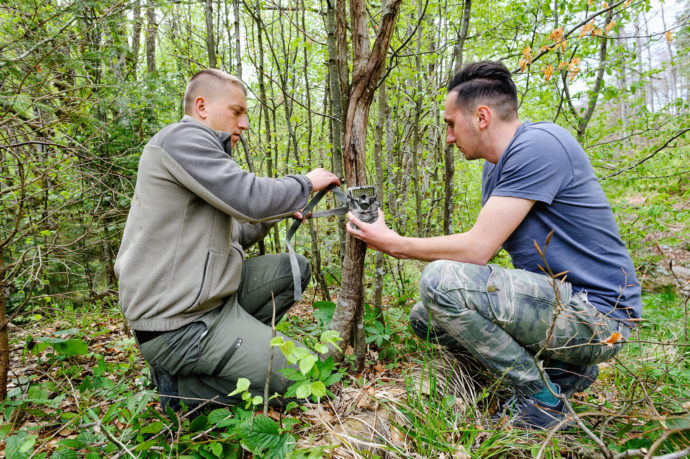 When did you join the bison rewilding initiative? And what was your reaction to this proposal?

Matei: I’ve been involved in this rewilding project since 2014, the year of the first bison transport in this area. The WWF team was looking for somebody who loves nature, knows the area and speaks English. I had just finished my undergraduate degree in economic studies and was at home searching for a job.

Danu: I’ve also been working in this project since 2014. I am working at the Visitor centre too and at the time WWF came here and made us this proposal – to become bison rangers. I accepted this opportunity on the spot.

[Ever since Danu and Matei joined the team as bison rangers, they went to courses in rangers’ duties and code of conduct and in management of protected areas and took part in an exchange programme with other nature and national parks in Europe facilitated by ProPark – the Romanian Foundation for Protected Areas]

What was your childhood dream of your future?

M: I was dreaming to become a footballer, as with all other children whom I spent my childhood with. I used to spend much of my time playing football.

D: When I was little I was dreaming to become a policeman, but in time I redirected my attention and now I am a ranger.

How does a day in your life as a ranger look like?

M: In the field no day is the same. But all days start at the Visitor centre where we spend a few hours getting ready for our patrol and running some other office errands. Then a 16 km journey awaits us, on a forestry road up to the rewilding area. As a ranger you need to learn about everything, there’s something to be done all the time, but I think the most important thing is to stay abreast with all that’s happening in the field, which implies covering a lot of the area and hence a considerable physical effort.

D: In fact, every day starts with a coffee together, very early in the morning. Then we head to the Visitor centre, followed by our daily fieldtrip. When we get up there, in the Bison Hillock, we usually check the electric fence from the acclimatisation and rewilding enclosures (so that it’s not broken or enveloped in vegetation), then we check up on the bison that are there temporarily (to see if they’re weak, if they show signs of disease, or to give them extra food if necessary). Then we go on our patrol to find the free bison and see how things are with them too. If we observe anything fishy, we report it back to the main project team. If we have tourists visiting the area and the bison, we sometimes guide them too and we also organise a get together with the kids in Armeniș from time to time.

Which are the main things you learned since you became a ranger?

M: I learned how important sound planning is and the value of teamwork in this kind of projects.

D:  In my case, the most important thing I learned as a ranger is to follow through with the tasks you’re responsible for.

M: I’m experiencing joy every time people appreciate and support our initiative. In terms of hardship, there were many moments. Any challenging moment could have been a potential crisis, the most important thing is to know how to manage these situations.

D: True joy for me was when the first bison arrived here in 2014. I was so emotional! And a moment of hardship was when the first baby bison was born in the enclosure and after five weeks we found it dead. It was Romanița’s calf, the alfa-female of the herd which we brought from the Hațeg bison reserve, and we called it Prâslea, a lovely Romanian name coming from a popular fairytale for kids. The autopsy showed that Prâslea was caught in a fight between some adult bison in the herd and suffered from a fatal wound.

Has your relation or perception of nature changed over these years?

M: My view of nature hasn’t changed much because I’ve always loved it, but I can say that now I know and I pay more attention to details. I’ve learned many scientific details about tracks of wildlife, for instance, or about trees and other vegetation, and so now I see these things differently and I can attach certain meanings to them. They are not just trees or hay anymore.

D: Things haven’t changed dramatically for me either, in terms of my view of nature. I was already fond of nature since I was little and I used to help my father in the woods – he was a forest worker and he let me identify all trees and plants and do the markings. Now that I’ve become a ranger, this early experience helped me a lot.

What do you like most about the bison? What fascinates you about this species?

M: I like to see that they kept their instincts as wild animals, even after so much time spent in captivity.

[All bison transported to the Țarcu Mountains under this initiative come from reproduction centres, zoos and nature reserves from across Europe, from Belgium, Italy, Sweden or Germany. This principle defines the concept of „rewilding” which has gained momentum over the past years to rehabilitate animal populations which have disappeared from the wild with the help of a few individuals which survived in captivity. One of the biggest challenges of this approach, the only one when it comes to saving certain species, is to help the animal get used to the wild environment and regain its instincts, thus reducing or even eliminating its dependency on humans.]

D: What fascinates me the most is the role they have in the ecosystem and the fact that they are majestic animals.

[The reintroduction of bison in the Southern Carpathians is done under the project “Urgent actions for the recovery of European bison populations in Romania”, implemented by Rewilding Europe and WWF-Romania with financial support from the EU, through its LIFE Programme. More details: www.life-bison.com. For a bison tour, please book your place at www.wwf.ro/visitbison.]