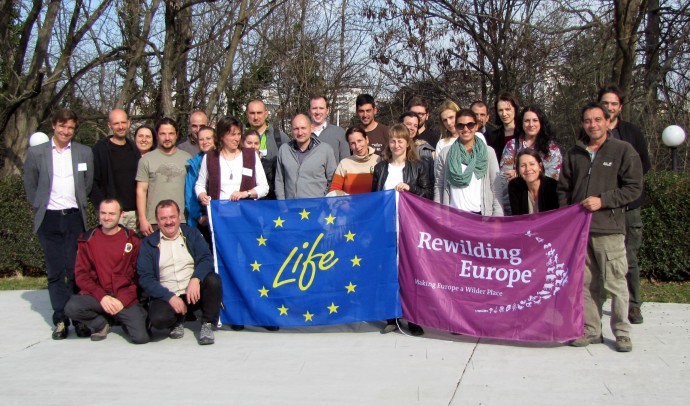 Rewilding Europe team members and partners from LIFE Vulture and LIFE Bison projects at the kick-off meeting in Haskovo, Bulgaria.

The kick-off meeting marked the start of an exciting five-year long cooperation between these organisations for two projects funded by the European Commission: LIFE Vultures – ‘’Conservation of Black and Griffon vultures in the cross-border Rhodope Mountains’’ – and LIFE Bison – ‘’Urgent actions for the recovery of European Bison populations in Romania’’.

LIFE Bison and LIFE Vultures projects are funded by LIFE financial instrument of the European Community.

During the two day long workshop regional project leaders and teams from both projects received a training on EU financial and administrative procedures, LIFE Programme common provisions and project management led by Annette Martens, LIFE Programme Advisor from Rewilding Europe. The teams discussed potential problems and challenges to ensure the smooth implementation of both projects during the next five years. Among others, a detailed time plan for the first year of the project in each project area was discussed and prepared.

The LIFE Vultures project was developed by Rewilding Europe in partnership with Rewilding Rhodopes Foundation, Bulgarian Society for the Protection of Birds/Birdlife Bulgaria, WWF Greece, Vulture Conservation Foundation and Hellenic Ornithological Society/BirdLife Greece. The project focuses on the recovery and further expansion of the black and griffon vulture populations in this part of the Balkan region, mainly by improving natural prey availability and reducing mortality factors such as poaching, poisoning and impact of power lines.

The main objectives of the project are to increase the knowledge of mortality factors,  threats and dispersal of both vulture species; to reduce disturbance, poisoning, direct persecution and lead poisoning; to increase the availability of food; to enhance stakeholder support including promoting local business related to vultures and wildlife; to increase awareness of vulture conservation and to facilitate cross-border cooperation.

During the meeting a large number of planned actions were discussed, including studies about dispersal and movements of vultures (20 black and 20 griffon vultures will be equipped with GPS transmitters); increase food availability through wild prey releases such as red and fallow deer (which through wolf kills leads to carcass availability); creating a trained dog unit to locate poisoning cases; a children’s programme at the Vulture Information Centre in Madzharovo; support of local businesses linked to vulture watching (including building of professional hides); support of related local products; reducing collision and electrocution by power lines – the latter through insulation of at least 250 dangerous power poles and bird diverters mounted at 2,5 km of power lines.

WWF Romania  joined the Rewilding Europe’s team on Wednesday morning for the kick off meeting of the jointly developed LIFE Bison Project, supporting the reintroduction of the European bison into the Tarçu Mountains Natura 2000 site in the Southern Carpathians rewilding landscape.

The objective that Rewilding Europe and  have set for this LIFE project is to create a free-roaming, viable population of bison by 2020, further growing towards an estimated 300 in 2024. By bringing back the European bison, not only a substantial contribution is made towards the conservation of this species in Europe, as laid out in the IUCN Species Action Plan for the European bison. It is also part of a large rewilding initiative in Romania, where Rewilding Europe and WWF Romania work together to create one of the largest contiguous wild areas in Europe numbering some 3 million hectares, connecting various protected areas, core wilderness areas and rewilding zones across the larger, southwestern Carpathians mountain range. This area consists of 6 different Natura 2000 sites and it is here where the European bison will be able to play its important ecological role in its natural habitats.

Apart from the reintroductions and the infrastructure needed for two different reintroduction sites, a substantial part of the funding will be used to work with the local communities and stakeholders to ensure they fully participate in and benefit from the initiative. Therefore, enterprise development connected to bison, monitoring by bison rangers, a youth programme, training, research and capacity building, a visitor centre, an indoor exhibition, reducing possible human-bison conflict, and promotion of local products related to bison are also among the activities.