The two-year programme will encourage more young Romanians to become involved in wild nature and forms part of a vision to use reintroduced bison as an engine for driving local development.

Activities at the school in Armenis, during the kick-off event of the two-year nature education programme.
Dan Dinu

An ambitious education programme recently launched in an area of the Southern Carpathians in Romania aims to involve youngsters in the conservation of local wild nature. It will build on the achievements of the European Commission-funded LIFE Bison project, through which Rewilding Europe and WWF Romania have been reintroducing European bison into the Southern Carpathians.

The educational outreach programme is part of a vision for using nature – with a particular focus on the reintroduced bison – as an engine for developing the region, with ongoing investment in nature-based tourism, community development, education, nature research and technological innovation.

Members of the bison rewilding project team met with representatives of five schools in the Southern Carpathians (from the counties of Hunedoara and Caras-Severin) at a school in the village of Armenis on November 11 to launch the non-formal education programme. This will run for two school years and involve students from the fifth to eighth grades. Teachers from each of the schools were trained at the event. 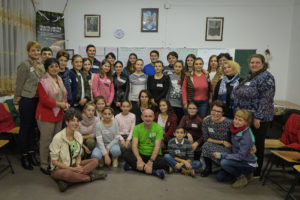 Catalina Murariu, WWF Romania’s Coordinator of Education for Sustainable Development and a trainer at the November event, is confident that the new youth clubs will take inspiration from the valuable results already achieved by the network over the past few years.

“It has been really gratifying to see so many young Romanians enthused by wild nature,” she says. “We are confident that the new clubs will grow in the same direction, and this will continue to have a positive effect on the whole region.”

The education programme has a number of objectives. 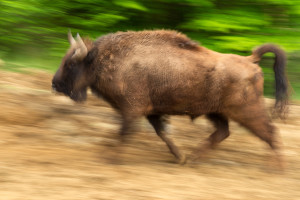 Once widespread across Europe, wild European bison were driven to extinction in the early twentieth century by hunting and habitat loss. Since 2013, Rewilding Europe and WWF Romania have been working together in the Southern Carpathians rewilding area to restablish a free-roaming population of this iconic animal. The first two bison releases took place in 2014 and 2015, close to Armenis. In June 2016, a third bison release took place as part of the LIFE Bison Project, with a fourth release of nine animals taking place in April this year. Three calves were born into the reintroduced herds this year.