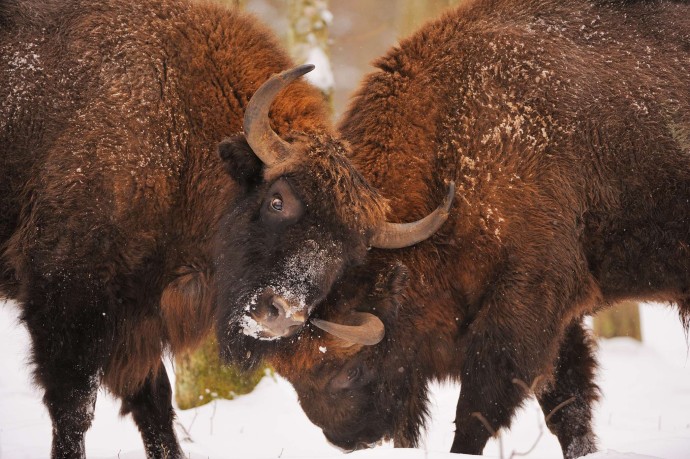 Bison bonasus, the largest land mammal in Europe, is a key species for preserving wilderness strongholds.
The bison’s browsing ability in the search of food helps maintain a mosaic of forested areas and grasslands, a landscape which is highly valuable from an ecological point view, with its diversity and abundance of species and natural resilience in the face of climate challenges.

Moreover, the bison is a species that, if successfully re-introduced and its habitat actively preserved across the entire Carpathian mountain range, will help maintain ecological corridors on a large scale, allowing for species migration, be it the bison itself or other large carnivores such as the brown bear, the wolf or the lynx. It needs large areas of prime quality natural environment, with very little or no human disturbance, which also allows for other wildlife species to thrive.

Re-introducing the bison to the Natura 2000 site in the Tarcu Mountains and Poiana Ruscă Mountains is in line with recommendations made in the IUCN Status Survey and Conservation Action Plan for the European Bison; which was the outcome of the workshop organised by the Large Herbivore Foundation on Bison Conservation in the Carpathians in 2004; and this is also in accordance with the Natura 2000 policy (Habitat Directive) to appoint the bison as a priority species for Natura 2000 sites.

The European bison is one of the most threatened large mammals in the world and it is protected at European level.