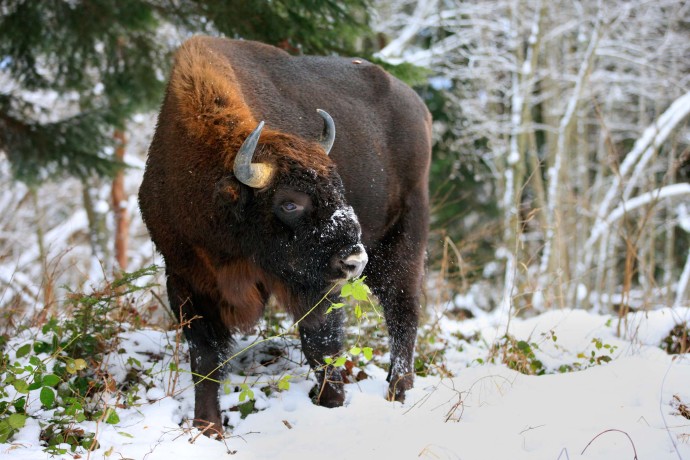 The European bison is the largest terrestrial mammals in Europe; the weight of adult males ranges from 530–840 kg in the wild. Females are smaller, weighing 320–540 kg. They are sexually dimorphic, with the bulls having heavier heads and bigger humps than cows. Both males and females have horns and use them for fighting, although the bull’s horns are thicker and wider and set further apart.

Free-living bison are known to form larger herds in winter when they are fed through feeding stations and congregate around this artificial food source. Groups of bison do not form family units and mixed groups are the basic units for a bison population, comprising cows, juvenile males and females aged two to three years, calves and occasionally adult bulls. The average group size is 20 individuals and lead by a dominant female. By the end of April, the large winter herds split into smaller groups of 12 animals on average and adult bulls become solitary or form small groups up to three bulls before joining the herd again during the rutting season between August and October. Without having territorial behaviour, bison groups can meet and individuals can transfer between groups.

Bison become sexually mature at the age of three, but bulls become active only at the age of six or seven. In general females breed every second year, giving birth to one calf, until the end of their life. Bulls become sexually inactive at the age of 12. During the rutting season from August to October, the bulls stay with a herd up to six days and show off their dominance and strength by breaking young trees and wallowing behaviour. Once a cow shows mating behaviour, the bull separates her from the herd and bonding occurs for two to three days. The gestation period is eight to nine months and most calves are born in May or June. Calves weigh 25 to 30 kg and will suckle for approximately one year.

Diet and habitat use

The European bison is a ruminant and consumes both grasses and more fibrous food. The digestive system requires a regular food intake which is paused by rest and rumination. Calves consume daily 8.5 kg while adults can eat more than 30 kg daily. Bisons are intermediate grazers, meaning that besides the more than 200 different plant species, also bark and branches are consumed depending on the season. Bison avoid areas with overly wet conditions, lack of water, steep slopes, unfavourable grazing/browsing conditions, extended periods of snow and deep snow. During winter the snowy mountains drive to bison towards the valleys, where the bison effectively can dig out food with their hooves. The bison prefers to reside in deciduous or mixed forests, and not in alderwoods or coniferous forests.

European bison is one of the most threatened species in the world, even more so than the Black Rhino in Africa, for example. Like other mega-herbivores, the European bison is of vital importance for the sustainable survival of European biodiversity, especially when it comes to plants. This feature, combined with its rarity and impressive appearance, makes the European bison an iconic species for nature conservation.

At the end of the 18th century, due to reduced habitat and hunting, European bison could only be found in the wild in so-called ”Bison Land”, a continuous area running from the North-East of Transylvania and North-West of Moldavia, to the neighbouring Ukrainian border. Similarly as in the other parts of the Carpathians, the bison in Romania had disappeared by the 18th and 19th centuries. All historic records regarding European bison are associated with forest areas.

The decrease in suitable habitat for European bison and their persecution, resulting from competition with domestic livestock, are the two main reasons for their earlier disappearance on the plains and in mountainous regions. In general, suitable habitat for humans including accessible water and good, fertile ground, also correspond with the habitat needs of many large herbivores including European Bison – leading to direct competition and the bison’s consequent survival in refugee habitat; in mountains and forests.

The presence of a well-established population of bison contributes to the maintenance of a mosaic structure in the ecosystem, by suppressing the overgrowth of openings, glades and meadows with woody vegetation. Together with other large herbivores they are able to maintain grassland open in a naturally recurring way. Due to a more diversified structure of natural vegetation, new ecological niches are created for other species like invertebrates, birds, small mammals etc. In the reintroduction area of the Southern Carpathians, a major ecological benefit of the European bison introduction will be the establishment of an ”umbrella species” in the region. This term refers to a species with high environmental requirements regarding habitat quality, over a considerable area of its home range; adequate environmental conditions for such species also facilitates many other organisms’ presence. Hence, the conservation programme allowing for a viable population of European bison to be established will also be an effective tool for large-scale nature conservation in the region